Events in May offered support to the thesis that Africa can incubate tech with global application.

Two startups that developed their business models on the continent — MallforAfrica and Zipline — were tapped by international interests.

DHL acquired a minority stake in Link Commerce, a turn-key e-commerce company that grew out of MallforAfrica.com — a Nigerian digital-retail startup.

Retailers can plug into the company’s platform to create a web-based storefront that manages payments and logistics.

Nigerian Chris Folayan founded MallforAfrica in 2011 to bridge a gap in supply and demand for the continent’s consumer markets. While living in the U.S., Folayan noted a common practice among Africans — that of giving lists of goods to family members abroad to buy and bring home.

With MallforAfrica Folayan aimed to allow people on the continent to purchase goods from global retailers directly online.

The e-commerce site went on to onboard over 250 global retailers and now employs 30 people at order processing facilities in Oregon and the UK.

Folayan has elevated Link Commerce now as the lead company above MallforAfrica.com. He and DHL plan to extend the platform to emerging markets around the world and offer it to companies who want to wrap an online stores, payments and logistics solution around their core business

“Right now the focus is on Africa…but we’re taking this global,” Folayan said.

Another startup developed in Africa, Zipline, was tapped by U.S. healthcare provider Novant for drone delivery of critical medical supplies in the fight against COVID-19.

Zipline and Novant are touting the arrangement as the first authorized long-range drone logistics delivery flight program in the U.S. The activity has gained approvals by the U.S. Federal Aviation Administration and North Carolina’s Department of Transportation.

The story behind the Novant, Zipline UAV collaboration has a twist: the capabilities for the U.S. operation were developed primarily in Africa. Zipline has a test facility in the San Francisco area, but spent several years configuring its drone delivery model in Rwanda and Ghana.

Co-founded in 2014 by Americans Keller Rinaudo,  Keenan Wyrobek and Will Hetzler, Zipline designs its own UAVs, launch systems and logistics software for distribution of critical medical supplies.

The company turned to East Africa in 2016, entering a partnership with the government of Rwanda to test and deploy its drone service in that country. Zipline went live with UAV distribution of life-saving medical supplies in Rwanda in late 2016, claiming the first national drone-delivery program at scale in the world.

The company expanded to Ghana in 2016, where in addition to delivering blood and vaccines by drone, it now distributes COVID-19-related medication and lab samples.

In addition to partner Novant Health, Zipline has caught the attention of big logistics providers, such as UPS — which has supported (and studied) the startup’s African operations back to 2016.

The presidents of Rwanda and Ghana  — Paul Kagame and Nana Akufo-Addo — were instrumental in supporting Zipline’s partnerships in their countries. Other nations on the continent, such as Kenya,  South Africa and Zambia, continue to advance commercial drone testing and novel approaches to regulating the sector.

African startups have another $100 million in VC to pitch for after Novastar Ventures’ latest raise.

The Nairobi and Lagos-based investment group announced it has closed $108 million in new commitments to launch its Africa Fund II, which brings Novastar’s total capital to $200 million.

With the additional resources, the firm plans to make 12 to 14 investments across the continent, according to Managing Director Steve Beck .

On demand mobility powered by electric and solar is coming to Africa.

Vaya Africa, a ride-hail mobility venture founded by Zimbabwean mogul Strive Masiyiwa, launched an electric taxi service and charging network in Zimbabwe this week with plans to expand across the continent.

The South Africa-headquartered company is using Nissan Leaf EVs and has developed its own solar-powered charging stations. Vaya is finalizing partnerships to take its electric taxi services on the road to countries that could include Kenya, Nigeria, South Africa and Zambia, Vaya Mobility CEO Dorothy Zimuto told TechCrunch.

The initiative comes as Africa’s on-demand mobility market has been in full swing for several years, with startups, investors and the larger ride-hail players aiming to bring movement of people and goods to digital platforms.

Uber and Bolt have been operating in Africa’s major economies since 2015, where there are also a number of local app-based taxi startups. Over the last year, there’s been some movement on the continent toward developing EVs for ride-hail and delivery use, primarily around motorcycles.

Beyond environmental benefits, Vaya highlights economic gains for passengers and drivers of shifting to electric in Africa’s taxi markets, where fuel costs compared to personal income is generally high for drivers.

Vaya is exploring EV options for other on-demand transit applications — from min-buses to Tuk Tuk taxis.

In more downbeat news in May, Africa-focused tech talent accelerator Andela had layoffs and salary reductions as a result of the economic impact of the COVID-19 crisis, CEO Jeremy Johnson confirmed to TechCrunch.

The compensation and staff reductions of 135 bring Andela’s headcount down to 1,199 employees. None of Andela’s engineers were included in the layoffs.

Backed by $181 million in VC from investors that include the Chan Zuckerberg Initiative, the startup’s client-base is comprised of more than 200 global companies that pay for the African developers Andela selects to work on projects.

There’s been a drop in the demand for Andela’s services, according to Johnson.

African tech around the ‘net

DHL has acquired a minority stake in Link Commerce, a turn-key e-commerce company that grew out of MallforAfrica.com — a Nigerian digital-retail startup.

Retailers can plug into the company’s e-commerce platform to create a web-based storefront that manages payments and logistics.

With the investment one of the world’s largest delivery services looks to build a broader client-base globally using a business built in Africa.

“DHL is trying to get their hands more into global e-commerce…across the world and they figured our platform was a good way to do it,” Link Commerce CEO Chris Folayan told TechCrunch.

Folayan originally founded MallforAfrica, which paved the way for Link Commerce. DHL’s investment in the company —  the amount of which is undisclosed — has roots in collaboration with Folayan’s original startup.

MallforAfrica began a partnership with DHL in 2015 and launched DHL Africa eShop in 2019. The sales platform is powered by Link Commerce and has brought more than 200 U.S. and U.K. sellers — from Neiman Marcus to Carters — online to African consumers in 34 countries. 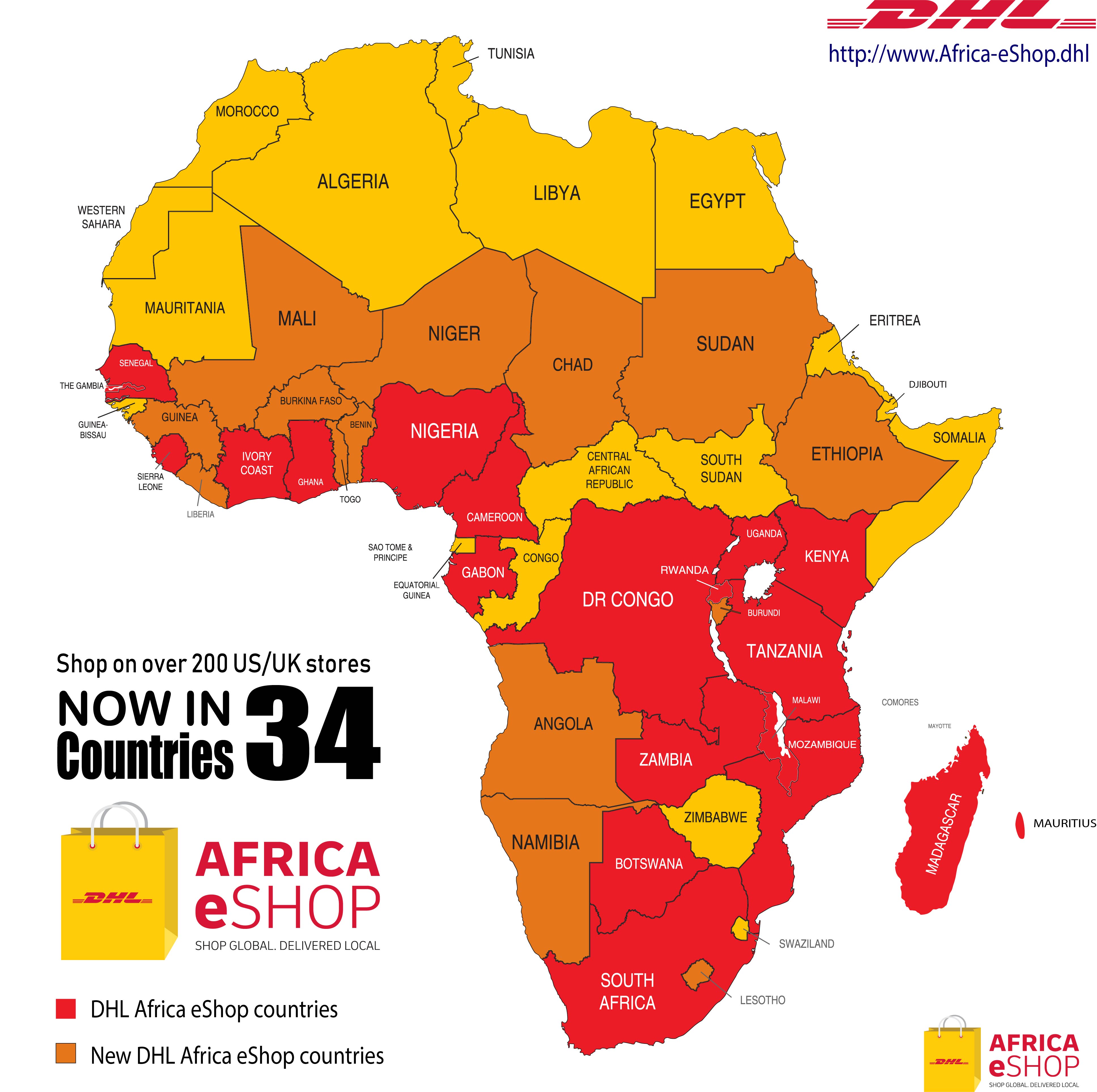 Similar to MallforAfrica’s model, Africa eShop allows users to purchase goods directly from the websites of any of the app’s partners.

For the global retailers selling on Africa eShop, the hurdles that held back distribution on the continent — payments, currency risk, logistics — are handled by the underlying Link Commerce operating platform.

“That’s what our service does. It takes care of that whole ecosystem to enable global e-commerce to exist, no matter what country you’re in,” Folayan told TechCrunch in 2019.

Link Commerce was built out of Folayan’s startup MallforAfrica.com, which he founded in 2011 after studying and working in the U.S.

A common practice among Africans — that of giving lists of goods to family members abroad to buy and bring home — highlighted a gap between supply and demand for the continent’s consumer markets.

With MallforAfrica Folayan aimed to close that gap by allowing people on the continent to purchase goods from global retailers directly online. 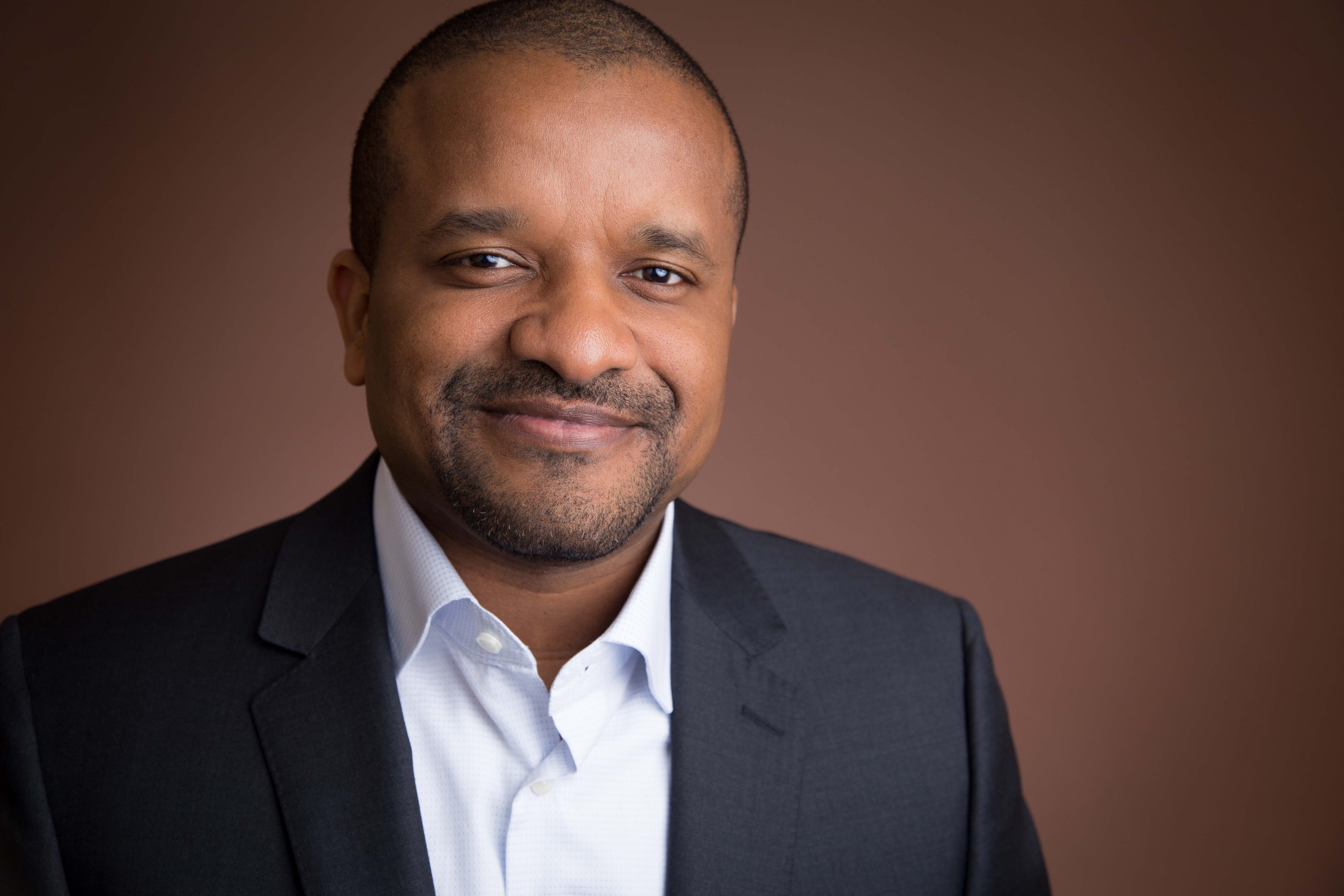 The e-commerce site went on to onboard over 250 global retailers and now employs 30 people at order processing facilities in Oregon and the UK.

MallforAfrica’s Africa eShop expansion put it on a footing to compete with Pan African e-commerce leader Jumia — which went public on the NYSE in 2019 — and China’s Alibaba, anticipated to enter online retail on the continent at some point.

The Link Commerce, DHL deal won’t change that, but Folayan has shifted the hirearchy of his businesses to make Link Commerce the lead operation and Africa one market of many. 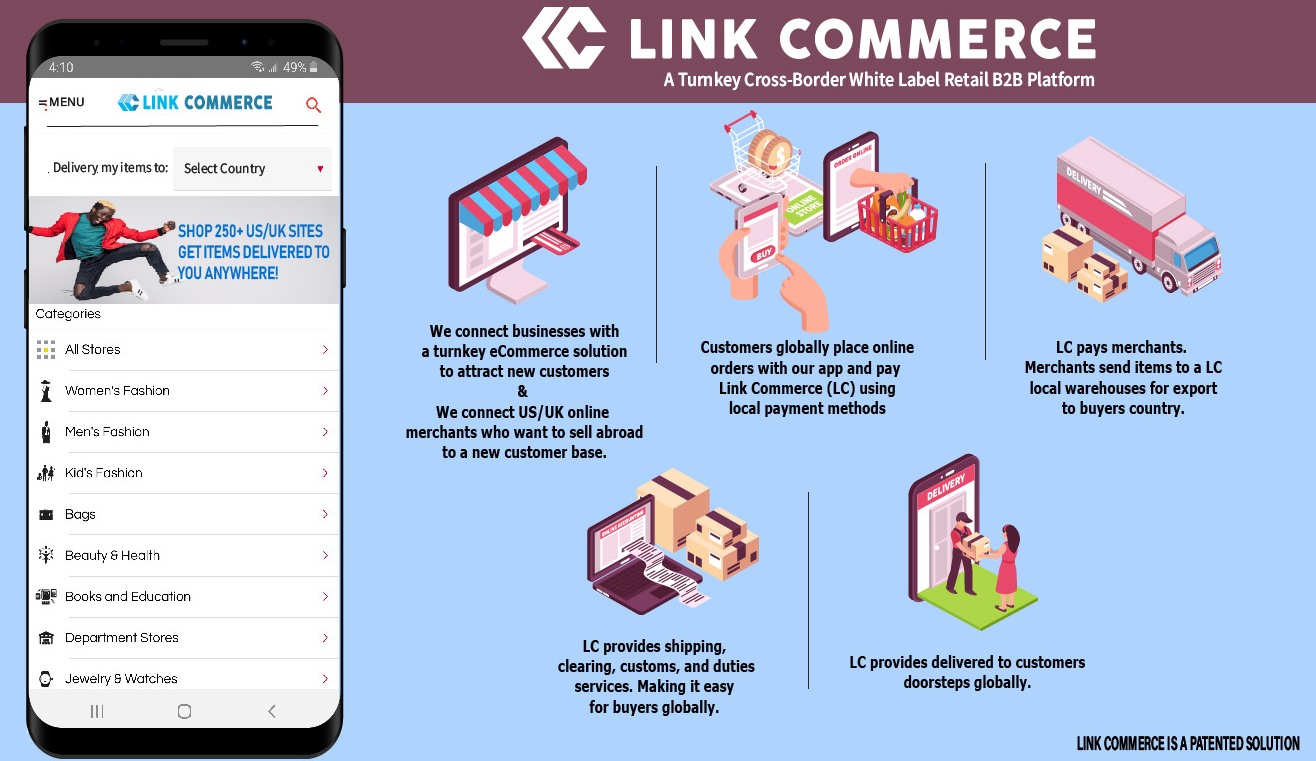 “Right now the focus is on Africa…but we’re taking this global,” he added.

Folayan and DHL plan to extend the platform to emerging markets around the world, where other companies may look to grow by wrapping an online store, payments, and logistics solution around their core business.

That could include any large entity that wants to launch an international e-commerce site, according to Folayan.

“Link Commerce is focused on banks, mobile companies, shipping companies and partnering with them to expand globally,” he said.

What began as a startup to sell brand name jeans and sneakers online in Africa, has pivoted to a global e-commerce fulfillment business partially owned by logistics giant DHL.

Jumia, DHL and Alibaba will face off in African e-commerce 2.0