In the heart of coal country, the town of Rawlins will soon be home to one of the nation’s largest wind farms. But pride in the fossil fuel past remains a powerful force.

The New River Gorge in West Virginia got the federal government’s highest protection, thanks, in part, to the latest pandemic relief bill.

A broad move away from coal power was an important factor in pushing down global greenhouse gas emissions, researchers said, and could help accelerate a shift toward renewable energy.

The governor of West Virginia, who supported a bigger relief bill than Senator Joe Manchin, a Democrat, initially did, spoke with us about government spending, Covid-19 vaccinations and climate policy.

The ruling strikes down weak rules for coal-burning power plants and gives the Biden administration a freer hand to impose tighter restrictions.

Earlier this week, the US Energy Information Agency (EIA) released figures on the new generating capacity that’s expected to start operating over the course of 2021. While plans can obviously change, the hope is that, with its new additions, the grid will look radically different than it did just five years ago. This includes the details, where a new nuclear plant may be started up, although it will be dwarfed by the capacity of new batteries. But the big picture is that, even ignoring the batteries, about 80 percent of the planned capacity additions will be emission-free.

The EIA’s accounting shows that just under 40 Gigawatts of capacity will be placed on the grid during 2021, but there are a number of caveats to this. First and foremost is the inclusion of batteries, which account for over 10 percent of that figure (4.3GW). While batteries may look like short-term generating capacity from the perspective of “can this put power on the grid?”, they’re obviously not actually a net source of power. Typically, they’re used to smooth over short-term fluctuations in supply or demand rather than a steady source of power.

Still, given the rarity of grid-scale batteries even a few years ago, 4.3GW of them is striking.

Emissions plunged more than 10 percent. If the trend can be sustained, it would put the United States within striking distance of one of its major goals under the Paris climate agreement.

China is vague about why vessels that carried Australian coal to its ports can’t unload their cargo. “We’re all depressed; our mental health is deteriorating,” one sailor said.

Warning of coal shortages, officials are trying to curb energy usage by telling residents not to use electric stoves and extinguishing lights on building facades and billboards.

China has officially blocked coal imports from Australia after months of vague restrictions. For Australia, the world’s largest coal exporter, the decision is a gut punch.

Speaking at an online summit on the fifth anniversary of the Paris climate agreement, Xi Jinping said that China would reduce its carbon intensity by over 65 percent by 2030.

The comptroller’s threat to pull billions from fossil fuel investments is a big victory for climate activists.

Massive volcanic eruptions ignited oil and coal deposits in Siberia in the events that led to the Permian-Triassic “Great Dying” event.

Wind and solar are better bets for investors and the planet.

The physics of climate change dictate that we must move on from fossil fuels to avoid expensive and deadly consequences, but that shift obviously comes with pain for communities and businesses tied to the fossil fuel industry. This may bring to mind coal-mining communities in places like Kentucky and West Virginia, but it’s also playing out across the Navajo and Hopi lands in Arizona and New Mexico.

There are several coal plants located in or near the Navajo Nation, fed by associated coal mines, and staffed by Navajo and Hopi workers—a major source of jobs. Of these, the Navajo Generating Station and Kayenta mine has already shuttered, while the Cholla Power Plant is shutting down over the next few years. The Four Corners plant in New Mexico has seen its planned 2031 retirement date accelerated.

There are several reasons for this. Older coal plants have been retiring across the US as the economics favor cheaper natural gas and renewables. Additionally, the electric utility Arizona Public Service (APS), which owns part of each of these three plants, had a change in leadership at the beginning of the year. New CEO Jeff Guldner announced a plan for the utility to reach zero emissions by 2050, with 45 percent of its electricity from renewables by 2030. That was a shocking reversal considering that APS spent nearly $40 million to fight a 2018 ballot proposition that would have required 50 percent renewables by 2030.

The announcement, coming weeks after a similar pledge by China, will require a major overhaul of the infrastructure in Japan, which remains heavily dependent on fossil fuels.

The announcement, coming weeks after a similar pledge by China, will require a major overhaul of the infrastructure in Japan, which remains heavily dependent on fossil fuels.

After the candidate called for a “transition” away from oil and gas, executives said the country would need fossil fuels for decades to come.

The demise of coal-fired power plants in Arizona and Kentucky shows how the president, despite promises to restore jobs, failed to counter the forces decimating the industry.

Embracing solar panels to save money, homeowners have made the country a powerhouse in renewable energy.

Under international pressure to do more to address global warming, Xi Jinping made a surprise commitment to drastically reduce emissions. Now comes the hard part.

On Monday, the EPA issued updated rules on pollution limits that haven’t been updated in over 30 years. The rules cover water pollution that results from burning coal for power, pollution that can place a variety of toxic metals into the nation’s waterways. The 2020 regulations replace an Obama-era attempt to set more stringent rules to limit pollution, with the changes motivated in part by the EPA’s decision to avoid having the added costs of control measures push any coal plants out of business.

From fossil fuels to water

Coal is the dirtiest form of electricity generation, with a lot of its problems caused by the release into the air of particulates, toxic metals like mercury, and harmful environmental chemicals like sulfates. But, somewhat ironically, controlling these pollutants creates its own set of problems. Many of processes that remove these chemicals from coal plant exhaust end up with some of the exhaust components dissolved in water.

In addition, the byproduct of coal production, the coal ash, is often cooled and moved out of the plant using water, producing even more contaminated material. The list of toxic materials in this water is extensive—arsenic, lead, mercury, selenium, chromium, and cadmium. These materials have a variety of health effects, and many can persist in the environment for decades or longer. The EPA has estimated that this contaminated water accounts for about 30 percent of all of the toxic pollutants releases in the United States.

The agency weakened Obama-era rules meant to keep metals and other pollution out of rivers and streams, saving industry tens of millions of dollars.

In “Soul Full of Coal Dust,” the Pulitzer Prize-winning journalist Chris Hamby tells the story of black lung and the mining companies who refused to take responsibility for its harm.

As coal declines and wind and solar energy rise, some are pushing to limit the use of natural gas, but utilities say they are not ready to do so.

After a concerted reintroduction effort two decades ago, the state is now home to the largest population of elk east of the Mississippi. The animals’ home: reclaimed coal mines.

The government, after years of delays, is finally clarifying rules on tax breaks for companies that use carbon capture to fight climate change.

Two weeks ago, we covered a US Energy Information Administration (EIA) projection that renewable wind, solar, and hydroelectric power would top coal for total electricity generation in 2020. That was particularly believable given that renewables had beat coal in daily generation every day going back to March 24. As it happens, that daily streak finally came to an end this week, as coal picked up amid rising demand and a couple low days for wind. Coal likely topped renewables on Tuesday, although it’s possible that rooftop solar generation (not included in EIA’s daily data) extended the run until Wednesday.

But the EIA also released some numbers Thursday that highlight a related and interesting piece of trivia: if you include energy use beyond the electric sector and all types of renewable energy, renewables actually beat out coal last year. And to find the last time that was true, you have to go all the way back to the 1880s.

This comparison includes biofuels (like ethanol and biodiesel), wood-burning, and waste incineration or landfill gas. And beyond electricity, it adds in energy used by industry, residential and commercial buildings, and transportation—uses where coal plays little or no role.

The US electrical grid is in the middle of a remarkable streak that is partly the story of the rise of renewables, partly the decline of coal, and partly the pervasive repercussions of COVID-19. And the US Energy Information Administration’s latest projections suggest it’s more than just a spring curiosity.

According to the EIA’s daily data summaries, wind, solar, and hydroelectric power plants have combined to produce more electricity than coal every single day since March 24. (These numbers don’t include rooftop solar generation, but its inclusion certainly wouldn’t change the streak.) Natural gas remains the largest source of generation, while nuclear’s contribution was similar to renewables. 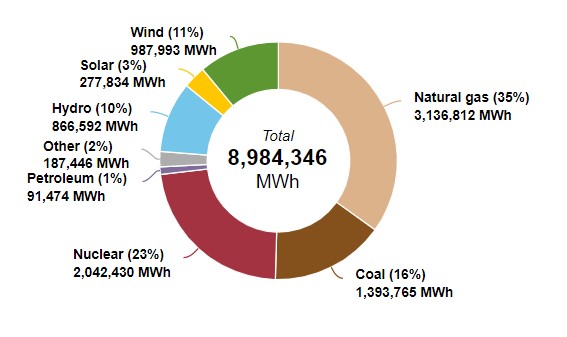 Here’s EIA’s daily stats for utility generation on May 11. (credit: US EIA)

Renewable generation ticked upward over this time period while coal plants were dialed down. April also typically sees low demand for electricity, and the pandemic has decreased demand even more. But EIA’s latest “Short-Term Energy Outlook” projects that renewables will out-produce coal for 2020 as a whole—a first. They also expect that coal will bounce back very slightly in 2021 but at the expense of natural gas production, as slowed US gas production is expected to drive its price up. But even with a bit more coal use, the projection has renewables topping coal next year, too.

For the first time, the United States is on track to produce more electricity from renewables than from coal this year, a climate milestone.

An “unprecedented” fall in fossil fuel use, driven by the Covid-19 crisis, is likely to lead to a nearly 8 percent drop, according to new research.

The 1970 gathering ushered in significant achievements in protecting our environment. Now Trump is destroying them.