It’s an oppressively hot morning in the barnyard, even in the shade of the long open-air structure where the cows come to feed. On a typical farm, they would gather around a trough, but here at UC Davis they chow from special blue bins, which detect when and how much each one eats. It’s like Weight Watchers, only researchers here aren’t so much interested in these cows’ figures, but how much they burp.

Animal scientist Frank Mitloehner leads me to another kind of feeder, one that could easily be mistaken for a miniature wood chipper. He grabs a handful of the alfalfa pellets that the machine dispenses when it detects that a cow has poked its head in. “This is like candy to them,” Mitloehner says. I stick my head into the machine as Mitloehner points out a small metal tube within: “This probe measures the methane they exhale, and that happens every three hours for all the animals in this study.”

European satellite and communications startup, Hiber BV has secured €26 million in EU and private investment to expand its IoT satellite network.  The funding comes from the European Innovation Council Fund (EIC Fund), the EU’s innovation agency, which has a €278 million Innovation Fund. The EIC co-invested with an innovation credit provided by the Dutch government and existing shareholders. Other investors include Finch Capital, Netherlands Enterprise Agency and Hartenlust Group. Hiber’s satellite constellation tracks and monitors machines and devices in harder-to-reach places.

At the same time co-founder of Hiber, Laurens Groenendijk, is to step aside as managing director to turn his attention to “other investment initiatives” the company said in a statement. Steven Kroonsberg joins as CFO. Roel Jansen joins as CCO. Groenendijk has been Co-founder and Chief Executive Officer at Treatwell as well as a serial investor.

Coen Janssen, Chief Strategy Officer and co-founder of Hiber, commented: “The €26 million funding is fantastic validation for Hiber’s success and a major boost for the European ‘New Space’ sector. It is a key step in realizing our aim of making the Internet of Things really simple and available for everyone in remote and developing regions of the world.”

In particular, because it can reach out-of-the-way areas, Hiber’s network may be able to reduce losses in food production and leakages from oil wells.

Nicklas Bergman, European Innovation Council Fund Committee Member, commented: “I am glad to announce the EIC Fund support to this highly innovative company aiming at creating a European champion in the satellite Internet of Things sector. This equity financing will help Hiber to enable affordable and ubiquitous connectivity for the IoT solutions.”

Elia Montanari, Head of Management and Control at the European Space Agency, commented: “This major success has been supported at European level by collaboration of major EU bodies (EIC, EIB, ESA) fostering the Space Value Chain”.

In a recent interview discussing Bill Gates’ recent book “How to Avoid a Climate Disaster“, the Microsoft and Breakthrough Energy founder (and the world’s third wealthiest man) advocated for citizens of the richest countries in the world to switch to diets consisting entirely of what he called synthetic meat in an effort to curb greenhouse gas emissions.

Gates’ call is being met by startups and public companies hailing from everywhere from Amsterdam to Tel Aviv, London to Los Angeles, and Berkeley to… um… Chicago.

Indeed, two of the best funded companies in the lab-grown meat market hail from The Netherlands, where Mosa Meat is being challenged by a newer upstart, Meatable, which just announced $47 million in new financing.

The company aims to have its first product approved by European regulators by 2023 and notching commercial sales by 2025.

Meatable has a long road ahead of it, because, as Gates acknowledged in his interview with MIT Technology Review (ed. note: I’m available for a call, too, Bill), “the people like Memphis Meats who do it at a cellular level—I don’t know that that will ever be economical.”

Beyond the economics, there’s also the open question of whether consumers will be willing to make the switch to lab grown meat. Some companies, like the San Francisco-based Just Foods and Tel Aviv’s Supermeat are already selling chicken patties and nuggets made from cultured cells at select restaurants.

These products don’t get at the full potential for cellular technology according to Daan Luining, Meatable’s chief technology officer. “We have seen the nugget and the chicken burger, but we’re working on whole muscle tissue,” Luining said.

The sheer number of entrants in the category — and the capital they’ve raised — points to the opportunity for several winners if companies can walk the tightrope balancing cost at scale and quality replacements for free range food.

“The mission of the company is to be a global leader in providing proteins for the planet. Pork and beef and regularly eaten cuts have on environmental and land management,” Luining said. “The technology that we are using allows us to go into different species. First we’re focused on the animals that have the biggest impact on climate change and planetary health.”

For Meatable right now, price remains an issue. The company is currently producing meat at roughly $10,000 per pound, but, unlike its competitors, the company said it is producing whole meat. That’s including the fat and connective tissue that makes meat… well… meat.

Now with 35 employees and new financing, the company is trying to shift from research and development into a food production company. Strategic investors like DSM, one of the largest food biotech companies in Europe should help. So should angel investors like Dr. Jeffrey Leiden, the executive chairman of Vertex Pharmaceuticals; and Dr. Rick Klausner, the former executive director of the Bill and Melinda Gates Foundation and a founder of Juno Therapeutics, GRAIL, and Mindstrong Health, after leaving Illumina where he served as chief medical officer.

The company’s first commercial offering will likely be a lab-grown pork product, but with expanded facilities in Delft, the location of one of the top universities in The Netherlands, a beef product may not be far behind.

“[Meatable has] a great team and game-changing technology that can address the challenges around the global food insecurity issues our planet is facing,” said Klausner. “They have all the right ingredients to become the leading choice for sustainably and efficiently produced meat.”

Early Stage is the premier ‘how-to’ event for startup entrepreneurs and investors. You’ll hear first-hand how some of the most successful founders and VCs build their businesses, raise money and manage their portfolios. We’ll cover every aspect of company-building: Fundraising, recruiting, sales, product market fit, PR, marketing and brand building. Each session also has audience participation built-in – there’s ample time included for audience questions and discussion. Use code “TCARTICLE” at checkout to get 20 percent off tickets right here.

In what could be a starting gun for the commercialization of the cell-based meat business, upstart cultivated meat company Higher Steaks said it has managed to produce samples of its first products — bacon strips and pork belly made in a lab from cellular material.

With the revelation, Higher Steaks, a bootstrapped Cambridge, UK-based company, leapfrogs into a competitive position with a number of far larger companies that have raised far more capital.

“There’s still a lot of work until it’s commercial,” said Higher Steaks chief executive Benjamina Bollag, but the revelation of a pork belly product that’s made from 50 percent cultivated cells and a bacon product which contains 70 percent meat grown from a cell material in a laboratory is something of a milestone for the industry.

The remaining ingredients in Higher Steaks bacon and pork belly are a mixture of plant based, proteins, fats, and starches to bind the cellular material together. To achieve this first step on its road to commercialization, HIgher Steaks tapped the expertise of an undisclosed chef to formulate the meat into an approximation of the pork belly and bacon. 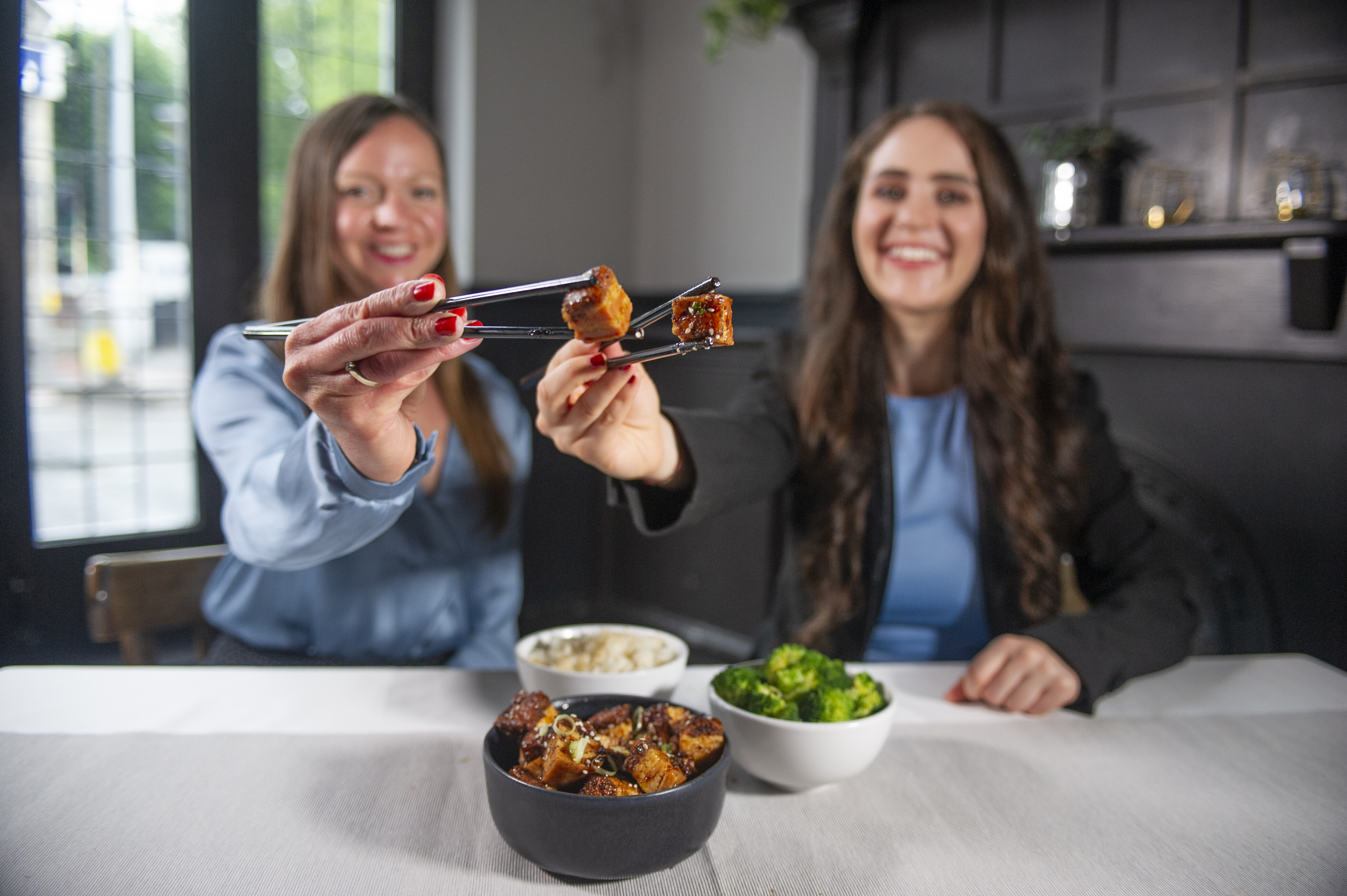 At this stage, the pilot was more to show what Higher Steaks can do rather than what the company will do, said Bollag.

A number of companies including Tantti Laboratories, Matrix Meats, and Prellis Biologics all make the kind of biomaterial nano-scale scaffolding that could be used as a frame on which to grow structures equivalent to the fibrous textures of muscle.

The commercial viability of products from companies like Higher Steaks, Memphis Meats, Aleph Farms, Meatable, Integriculture, Mosa Meat and Supermeat, depends on more than just companies like Tantti and Matrix. but also on the ability of Thermo Fisher, Future Fields, and Merck to bring down the cost of the cell cultures that are required to grow the animal cells.

In all, some thirty cell-based meat startups have launched globally since 2014 and they’re all looking for a slice of the $1.4 trillion meat market.

Meanwhile demand for pork continues to rise even as supplies have been decimated by an outbreak of African Swine Fever that could have killed as much as 40 percent of China’s population of pigs in 2019.

“Our mission is to provide meat that is healthy and sustainable without the consumer making any sacrifices on taste,” said Bollag in a statement. “The production of the first ever cultivated bacon and pork belly is proof that new techniques can help meet overwhelming demand for pork products globally.”

Given the highly capitalized competitors that Higher Steaks faces off against, the company is looking for industry partners to help commercialize its technology.

“I was always quite intrigued by cultured meat production, a mix of both science and food production. In 2013 I watched the first cultured meat burger from Mark Post costing £250k, cooked on the BBC,” said Clark. “I was approached about joining Higher Steaks earlier this year and was attracted to joining primarily by the science along with the ambition and energy of the Higher Steaks founder Benjamina Bollag. I believe Higher Steaks is a company with a technology to be disruptive in the cultured meat area and at my career stage I was looking for a challenge.”

Brought in to scale the cultivated meat process at Higher Steaks, Clark has led the development of biotech and pharma products at early stage and publicly traded companies.

“The addition of Dr James Clark to the team gives Higher Steaks a significant advantage,” said Dr. Ruth Helen Faram, Head of R&D. “Cultivated pork belly and bacon have never been demonstrated before and Higher Steaks is the first to develop a prototype containing over 70% cultivated pork muscle, without the use of bovine serum.”

The company does expect to have a larger tasting event later this year.