When Kleiner Perkins led Stord’s $12.4 million Series A in 2019, its founders were in their early 20s and so passionate about their startup that they each dropped out of their respective schools to focus on growing the business.

Fast-forward two years and Stord — an Atlanta-based company that has developed a cloud supply chain — is raising more capital in a round again led by Kleiner Perkins.

In fact, today’s funding marks Stord’s third since early December of 2020, when it raised its Series B led by Peter Thiel’s Founders Fund, and brings the company’s total raised since its 2015 inception to $205 million.

Founders Sean Henry, 24, and Jacob Boudreau, 23, met while Henry was at Georgia Tech and Boudreau was in online classes at Arizona State (ASU) but running his own business, a software development firm, in Atlanta.

Over time, Stord has evolved into a cloud supply chain that can give companies a way to compete and grow with logistics, and provides an integrated platform “that’s available exactly when and where they need it,” Henry said. Stord combines physical logistics services such as freight, warehousing and fulfillment in that platform, which aims to provide “complete visibility, rapid optimization and elastic scale” for its users.

About two months ago, Stord announced the opening of its first fulfillment center, a 386,000-square-foot facility, in Atlanta, which features warehouse robotics and automation technologies. “It was the first time we were in a building ourselves running it end to end,” Henry said.

And today, the company is announcing it has acquired Connecticut-based Fulfillment Works, a 22-year-old company with direct-to-consumer (DTC) experience and warehouses in Nevada and in its home state.

With FulfillmentWorks, the company says it has increased its first-party warehouses, coupled with its network of over 400 warehouse partners and 15,000 carriers.

While Stord would not disclose the amount it paid for Fulfillment Works, Henry did share some of Stord’s impressive financial metrics. The company, he said, in 2020 delivered its third consecutive year of 300+% growth, and is on track to do so again in 2021. Stord also achieved more than $100 million in revenue in the first two quarters of 2021, according to Henry, and grew its headcount from 160 people last year to over 450 so far in 2021 (including about 150 Fulfillment Works employees). And since the fourth quarter is often when people do the most online shopping, Henry expects the three-month period to be Stord’s heaviest revenue quarter.

For some context, Stord’s new sales were up “7x” in the second quarter of 2020 compared to the same period last year. So far in the third quarter, sales are up almost 10x, according to Henry.

Put simply, Stord aims to give brands a way to compete with the likes of Amazon, which has set expectations of fast fulfillment and delivery. The company guarantees two-day shipping to anywhere in the country.

“The supply chain is the new competitive battleground,” Henry said. “Today’s buying expectations set by Amazon and the rise of the omni-channel shopper have placed immense pressure on companies to maintain more nimble and efficient supply chains… We want every company to have world-class, Prime-like supply chains.”

What makes Stord unique, according to Henry, is the fact that it has built what it believes to be the only end-to-end logistics network that combines the physical infrastructure with software.

That too is one of the reasons that Kleiner Perkins doubled down on its investment in the company.

Ilya Fushman, Stord board director and partner at Kleiner Perkins, said even at the time of his firm’s investment in 2019, that Henry displayed “amazing maturity and vision.”

At a high level, the firm was also just drawn to what he described as the “incredibly large market opportunity.”

“It’s trillions of dollars of products moving around with consumer expectation that these products will get to them the same day or next day, wherever they are,” Fushman told TechCrunch. “And while companies like Amazon have built amazing infrastructure to do that themselves, the rest of the world hasn’t really caught up… So there’s just amazing opportunity to build software and services to modernize this multitrillion-dollar market.”

In other words, Fushman explained, Stord is serving as a “plug and play” or “one stop shop” for retailers and merchants so they don’t have to spend resources on their own warehouses or building their own logistics platforms.

Stord launched the software part of its business in January 2020, and it grew 900% during the year, and is today one of the fastest-growing parts of its business.

“We built software to run our logistics and network of hundreds of warehouses,” Henry told TechCrunch. “But if companies want to use the same system for existing logistics, they can buy our software to get that kind of visibility.”

Trees, those deciduous entities you can occasionally see outdoors when not locked down or strapped down at a desktop ruminating on a video call, have long been the inspiration for fresh new ideas. Stories abound of how founders built companies while walking the foothills in Silicon Valley or around parks in San Francisco, and yet, we’ve managed over the past year to take movement mostly out of our remote work lives.

Chicago-based Spot Meetings wants to reinvigorate our meetings — and displace Zoom as the default meeting medium at the same time.

The product and company are just a few months old and remain in closed beta (albeit opening up a bit shortly here), and today it’s announcing $5 million in seed funding led by Ilya Fushman at Kleiner Perkins. That follows a $1.9 million pre-seed round led by Chapter One earlier this year.

CEO and co-founder Greg Caplan said that the team is looking to rebuild the meeting from the ground up for an audio-only environment. “On mobile, it needs to be abundantly simple to be very functional and understood for users so that they can actually use it on the go,” he described. In practice, that requires product development across a wide range of layers.

The product’s most notable feature today is that it has an assistant, aptly named Spot, which listens in on the call and which participants can direct commands to while speaking. For instance, saying “Spot Fetch” will pull the last 40 seconds of conversation, transcribe it, create a note in the meeting, and save it for follow-up. That prevents the multi-hand tapping required to save a note or to-do list for follow up with our current meeting products. You “don’t even need to take your phone out,” Caplan points out.

What gets more interesting is the collaboration layer the company has built into the product. Every audio meeting has a text-based scratch pad shared with all participants, allowing users to copy and paste snippets into the meeting as needed. Those notes and any information that Spot pulls in are saved into workspaces that can be referenced later. Spot also sends out emails to participants with follow-ups from these notes. If the same participants join another audio meeting later, Spot will pull in the notes from their last meeting so there is a running timeline of what’s been happening. 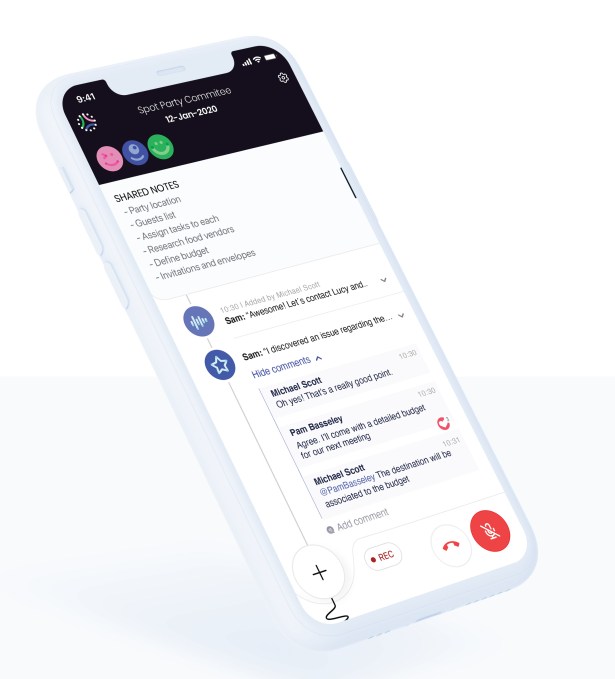 Obviously, transcription features are built-in, but Spot sees opportunities in offering edited transcripts of long calls where only a few minutes of snippets might be worth specifically following up on. So the product is a bit more deliberate in encouraging users to select the parts of a conversation that are relevant for their needs, rather than delivering a whole bolus of text that no one is ever actually going to read.

“Collaboration from now and the future is going to be primarily digital … in-person is forever going to be the exception and not the rule,” Caplan explained. Longer term, the company wants to add additional voice commands to the product and continue building an audio-first (and really, an audio-only) environment. Audio “very uniquely helps people focus on the conversation at hand,” he said, noting that video fatigue is a very real phenomenon today for workers. To that end, more audio features like smarter muting are coming. When a participant isn’t talking, their background noise will automatically melt away.

Before Spot Meetings, Caplan was the CEO and co-founder of Remote Year, a startup that was designing a service for company employees to take working trips overseas. I first covered it back in 2015, and it went on to raise some serious venture dollars before the pandemic hit last year and the company laid off 50% of its workforce. Caplan left as CEO in April last year, and the company was ultimately sold to Selina, which offers co-working spaces to travelers, in October.

Caplan’s co-founder who leads product and engineering at Spot Meetings is Hans Petter “HP” Eikemo. The duo met each other during the very first Remote Year cohort. “He has been a software engineer for two decades [and was] literally the first person I called,” Caplan said. The team will grow further with the new funding, and the company hopes to start opening its beta to its 6,000 waitlist users over the next 3-4 weeks.