When I was at Open Market in the 1990s, our CEO gave out the recently published book “Crossing the Chasm” to the executive team and told us to read it to gain insight into why we had hit a speed bump in our scaling. We had gone from zero to $60 million in revenue in four years, went public at a billion-dollar market cap, and then stalled.

We found ourselves stuck in what author Geoffrey Moore called “the chasm,” a difficult transition from visionary early adopters who are willing to put up with an incomplete product and mainstream customers who demand a more complete product. This framework for marketing technology products has been one of the canonical foundational concepts to product-market fit for the three decades since it was first published in 1991.

Why is it that in recent years, wild-eyed optimistic VCs and entrepreneurs keep undershooting market size across the tech and innovation sector?

I have been reflecting on why it is that we venture capitalists and founders keep making the same mistake over and over again — a mistake that has become even more glaring in recent years. Despite our exuberant optimism, we keep getting the potential market size wrong. Market sizes have proven to be much, much larger than any of us had ever dreamed. The reason? Today, everyone aspires to be an early adopter. Peter Drucker’s mantra — innovate or die — has finally come to pass.

A glaring example in our investment portfolio is database software company MongoDB. Looking back at our Series A investment memo for this disruptive open-source, NoSQL database startup, I was struck that we boldly predicted the company had the opportunity to disrupt a subsegment of the industry and successfully take a piece of a market that could grow as large as $8 billion in annual revenue in future years.

Today, we realize that the company’s product appeals to the vast majority of the market, one that is forecast to be $68 billion in 2020 and approximately $106 billion in 2024. The company is projected to hit a $1 billion revenue run rate next year and, with that expanded market, likely has continued room to grow for many years to come.

Another example is Veeva, a vertical software company initially focused on the pharmaceutical industry. When we met the company for their Series A round, they showed us the classic hockey stick slide, claiming they would reach $50 million in revenue in five years.

We got over our concerns about market size when we and the founders concluded they could at least achieve a few hundred million in revenue on the backs of pharma and then expand to other vertical industries from there. Boy, were we wrong! The company filed their S-1 after that fifth year showing $130 million in revenue, and today the company is projected to hit $2 billion in revenue run rate next year, all while still remaining focused on just the pharma industry.

Veeva was a pioneer in “vertical SaaS” — software platforms that serve niche industries — which in recent years has become a popular category. Another vertical SaaS example is Squire, a company my partner Jesse Middleton angel invested in as part of a pre-seed round before he joined Flybridge.

At its Ignite conference today, Microsoft announced the launch of Azure Managed Instance for Apache Cassandra, its latest NoSQL database offering and a competitor to Cassandra-centric companies like Datastax. Microsoft describes the new service as a ‘semi-managed offering that will help companies bring more of their Cassandra-based workloads into its cloud.

Like its counterpart, Azure SQL Manages Instance, the idea here is to give users access to a scalable, cloud-based database service. To use Cassandra in Azure before, businesses had to either move to Cosmos DB, its highly scalable database service which supports the Cassandra, MongoDB, SQL and Gremlin APIs, or manage their own fleet of virtual machines or on-premises infrastructure.

Cassandra was originally developed at Facebook and then open-sourced in 2008. A year later, it joined the Apache Foundation and today it’s used widely across the industry, with companies like Apple and Netflix betting on it for some of their core services, for example. AWS launched a managed Cassandra-compatible service at its re:Invent conference in 2019 (it’s called Amazon Keyspaces today), Microsoft only launched the Cassandra API for Cosmos DB last November. With today’s announcement, though, the company can now offer a full range of Cassandra-based servicer for enterprises that want to move these workloads to its cloud.

For years, founders and investors in China had little interest in open source software because it did not seem like the most viable business model. Zilliz‘s latest financing round shows that attitude is changing. The three-year-old Chinese startup, which builds open source software for processing unstructured data, recently closed a Series B round of $43 million.

The investment, which catapults Zilliz’s to-date raise to over $53 million, is a sizable amount for any open source business around the world. Storied private equity firm Hillhouse Capital led the round joined by Trustbridge Partners, Pavilion Capital, and existing investors 5Y Capital (formerly Morningside) and Yunqi Partners.

Investors are going after Zilliz as they increasingly recognize open source as an effective software development strategy, Charles Xie, founder and CEO of Zilliz, told TechCrunch at an open source meetup in Shenzhen where he spoke as the first Chinese board chairperson for Linux Foundation’s AI umbrella, LF AI.

“Investors are seeing very good exits for open source companies around the world in recent years, from Elastic to MongoDB,” he added.

How open-source software took over the world

“When Starlord [Xie’s nickname] first told us his vision for data processing in the future digital age, we thought it was a crazy idea, but we chose to believe,” said 5Y Capital’s partner Liu Kai.

There’s one caveat for investing in the area: don’t expect to make money in the first 3 to 5 years. “But if you’re looking at an 8 to 10-year cycle, these [open source] companies can gain valuation at tens of billions of dollars,” Xie reckoned.

After six years as a software engineer at Oracle, Xie left the U.S. and headed home to start Zilliz in China. Like many Chinese entrepreneurs these days, Xie named his startup in English to mark the firm’s vision to be “global from day one.” While Zilliz set out in Shanghai, the goal is to relocate its headquarters to Silicon Valley when the firm delivers “robust technology and products” in the next 12 months, Xie said. China is an ideal starting point both for the cheaper engineering talents and the explosive growth of unstructured data — anything from molecular structure, people’s shopping behavior, audio information to video content.

“The amount of unstructured data in a region is in proportion to the size of its population and the level of its economic activity, so it’s easy to see why China is the biggest data source,” Xie observed.

On the other hand, China has seen rapid development in mobile internet and AI, especially in terms of real-life applications, which Xie argued makes China a suitable testing ground for data processing software.

So far Zilliz’s open source product Milvus has been “starred” over 4,440 times on GitHub and attracted some 120 contributors and 400 enterprise users around the world, half of whom are outside China. It’s done so without spending a penny on advertising; rather, user acquisition has come from its active participation on GitHub, Reddit, and other online developer communities.

Going forward, Zilliz plans to deploy its fresh capital in overseas recruitment, expanding its open source ecosystem, as well as research and development in its cloud-based products and services, which will eventually become a revenue driver as it starts monetizing in the second half of 2021.

Robin.io, a cloud-native application and data management solution with enterprise customers like USAA, Sabre, SAP, Palo Alto Networks and Rakuten Mobile, today announced the launch of its new free(-mium) version of its service, in addition to a major update to the core of its tool.

Robin .io promises that it brings cloud-native data management capabilities to containerized applications with support for standard operations like backup and recovery, snapshots, rollbacks and more. It does all of that while offering bare-metal performance and support for all major clouds. The service is essentially agnostic to the actual database being used and offers support for the likes of PostgreSQL, MySQL, MongoDB, Redis, MariaDB, Cassandra, Elasticsearch and others. 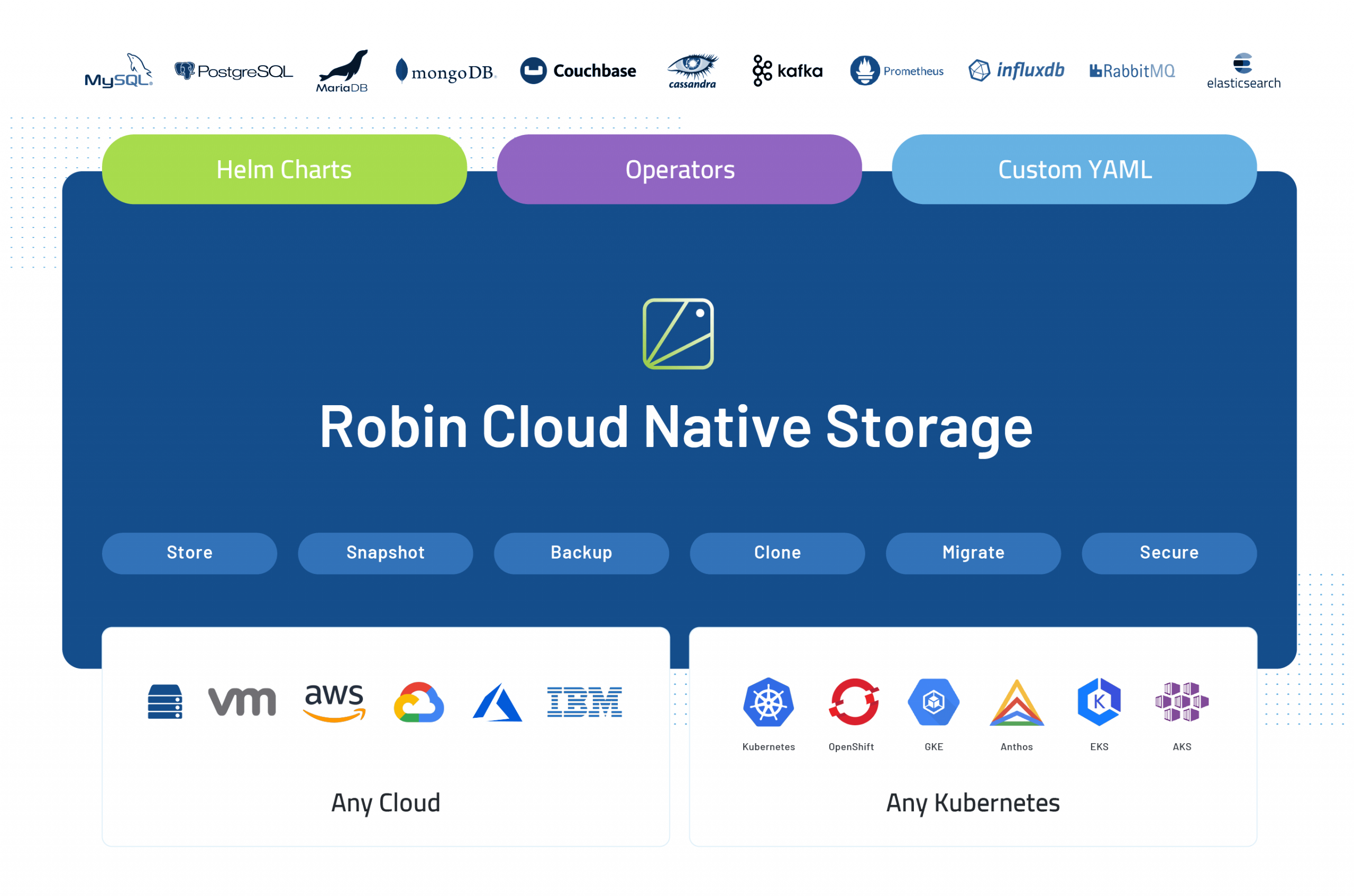 “Robin Cloud Native Storage works with any workload on any Kubernetes-based platform and on any cloud,” said Robin founder and CEO Partha Seetala. “With capabilities for storing, taking snapshots, backing up, cloning, migrating and securing data — all with the simplest of commands — Robin Cloud Native Storage offers developers and DevOps teams a super simple yet highly performant tool for quickly deploying and managing their enterprise workloads on Kubernetes.”

The new free version lets teams manage up to 5 nodes and 5TB of storage. The promise here is that this a free-for-life offering and the company obviously expects that it allows enterprises to get a feel for the service and then upgrade to its paid enterprise plans over time.

Talking about those enterprise plans, the company also today announced that it is moving to a consumption-based pricing plan, starting at $0.42 per node-hour (though it also offers annual subscriptions). The enterprise plan includes 24×7 support and doesn’t limit the number of nodes or storage capacity.

Among the new features to Robin’s core storage service are data management support for Helm Charts (where Helm is the Kubernetes package manager), the ability to specify where exactly the data should reside (which is mostly meant to keep it close to the compute resources) and affinity policies that ensure availability for stateful applications that rely on distributed databases and data platforms.

PopSQL, a startup that builds a collaborative SQL editor for teams, today announced that it has raised a $3.4 million seed round led by Google’s AI-focused Gradient Ventures fund. Other participants include Y Combinator and FundersClub, as well as angel investors Max Mullen, the co-founder of Instacart; Calvin French-Owen, the CTO of Segment; and Guillermo Rauch, the CEO of Vercel.

Like most startups at this stage, the company plans to use the new capital to execute on its product roadmap.

“I started PopSQL because I was frustrated with the existing tools on the market. I wanted a SQL editor that was beautiful, easy to use and collaborative. Just as new collaboration tools like Slack changed the way teams communicate, our vision is that PopSQL will change the way teams analyze and share data,” said Rahil Sondhi, CEO and founder of PopSQL. “The new capital from Gradient allows us to scale the company and pursue our vision of creating the best tools for teams to analyze data together.”

With PopSQL, teams can write a database query once and then easily share it within their company (and build a library of shared queries in the process). That’s a massive timesaver for many companies, where queries like this are often still shared by email or as code snippets in Slack, which PopSQL also integrates with. With this tool, developers and data analysts can also easily create different versions of a query. 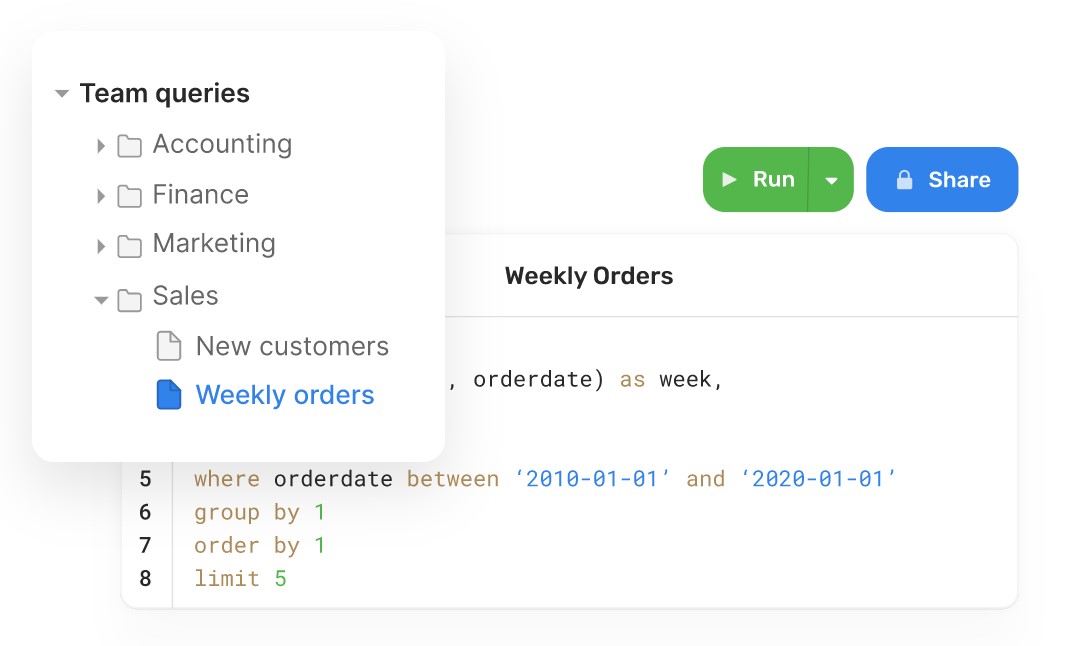 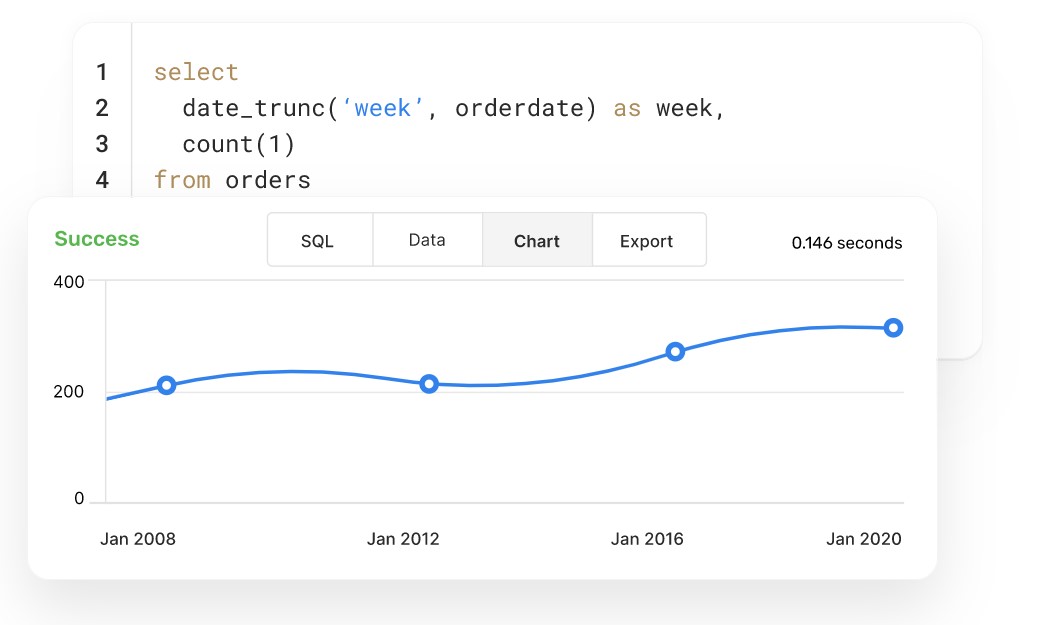 In addition to the collaborative features, though, PopSQL also offers a number of other interesting features, including the ability to schedule recurring queries using what is essentially a visual cron editor.

The tool also features some basic charting functions and while these are mostly meant to easily allow users to visualize their queries, you can also use this feature to build basic dashboards, for example. Sondhi noted that he doesn’t necessarily think of PopSQL as a business intelligence tool, but the core functionality is there if you want it. 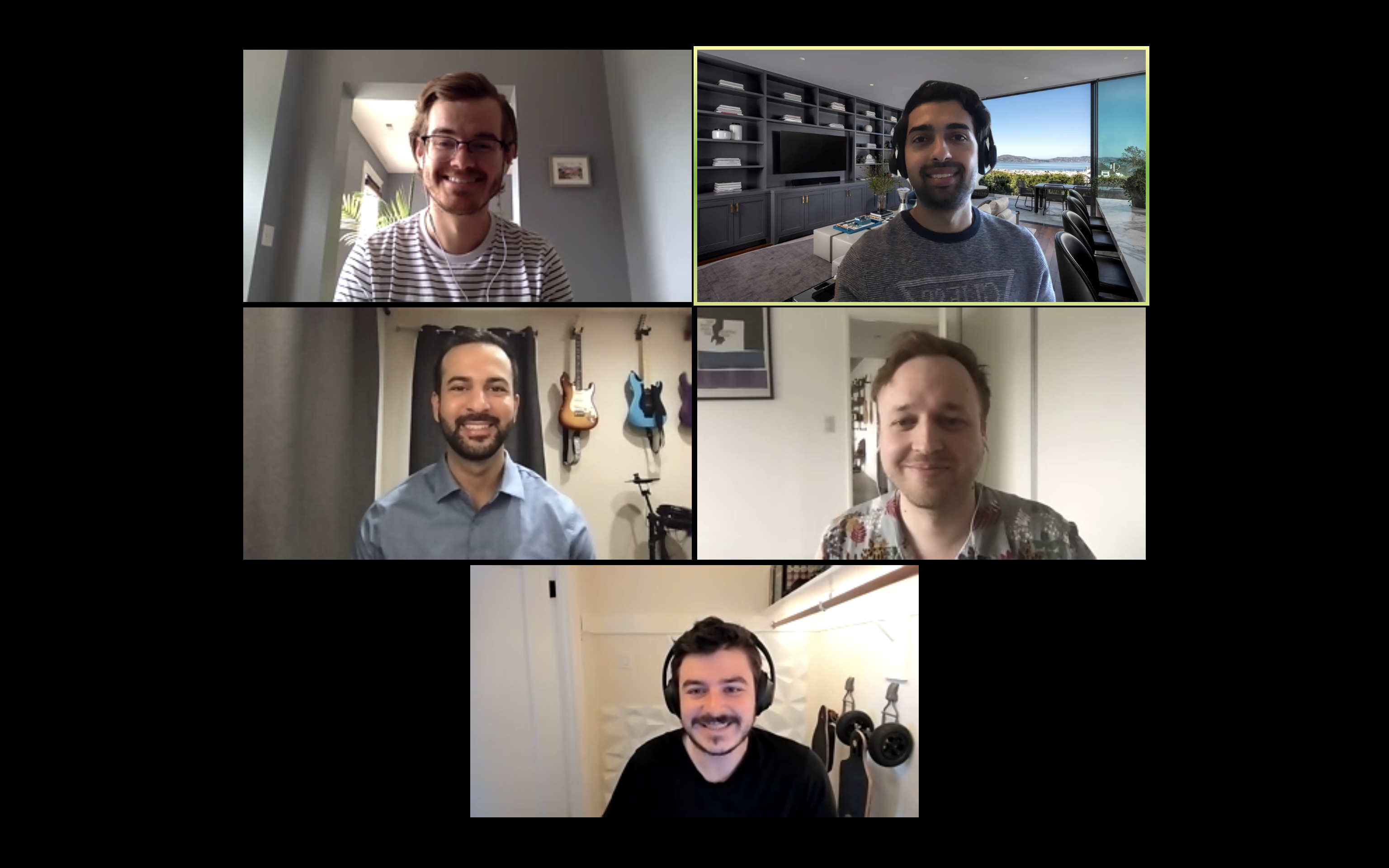