Summer camp in the middle of a pandemic has been a tech-free, joyous balm for some. For others, though, it’s a pit of anxiety.

Senator Maggie Hassan, a former governor of her state, is working to burnish her centrist image without making political waves.

A group of 37 attorneys general filed a second major multi-state antitrust lawsuit against Google Wednesday, accusing the company of abusing its market power to stifle competitors and forcing consumers into in-app payments that grant the company a hefty cut.

“Through its illegal conduct, the company has ensured that hundreds of millions of Android users turn to Google, and only Google, for the millions of applications they may choose to download to their phones and tablets,” James said in a press release. “Worse yet, Google is squeezing the lifeblood out of millions of small businesses that are only seeking to compete.”

In December, 35 states filed a separate antitrust suit against Google, alleging that the company engaged in illegal behavior to maintain a monopoly on the search business. The Justice Department filed its own antitrust case focused on search last October.

In the new lawsuit, embedded below, the bipartisan coalition of states allege that Google uses “misleading” security warnings to keep consumers and developers within its walled app garden, the Google Play store. But the fees that Google collects from Android app developers are likely the meat of the case.

“Not only has Google acted unlawfully to block potential rivals from competing with its Google Play Store, it has profited by improperly locking app developers and consumers into its own payment processing system and then charging high fees,” District of Columbia Attorney General Karl Racine said.

Like Apple, Google herds all app payment processing into its own service, Google Play Billing, and reaps the rewards: a 30 percent cut of all payments. Much of the criticism here is a case that could — and likely will — be made against Apple, which exerts even more control over its own app ecosystem. Google doesn’t have an iMessage equivalent exclusive app that keeps users locked in in quite the same way.

While the lawsuit discusses Google’s “monopoly power” in the app marketplace, the elephant in the room is Apple — Google’s thriving direct competitor in the mobile software space. The lawsuit argues that consumers face pressure to stay locked into the Android ecosystem, but on the Android side at least, much of that is ultimately familiarity and sunk costs. The argument on the Apple side of the equation here is likely much stronger.

The din over tech giants squeezing app developers with high mobile payment fees is just getting louder. The new multi-state lawsuit is the latest beat, but the topic has been white hot since Epic took Apple to court over its desire to bypass Apple’s fees by accepting mobile payments outside the App Store. When Epic set up a workaround, Apple kicked it out of the App Store and Epic Games v. Apple was born.

The Justice Department is reportedly already interested in Apple’s own app store practices, along with many state AGs who could launch a separate suit against the company at any time.

View this document on Scribd

The company says it had commissioned the University of New Hampshire’s Crimes Against Children Research Center to evaluate its existing program, which had last received a significant update back in 2019, when it added lessons that focused on teaching kids to spot disinformation and fake news.

The review found that program did help children in areas like dealing with cyberbullying, online civility and website safety, but recommended improvements in other areas.

Google then partnered with online safety experts like Committee for Children and The Net Safety Collaborative to revise its teaching materials. As a result, it now has lessons tailored to specific age groups and grade levels, and has expanded its array of subjects and set of family resources.

For example, some of the new lessons discuss search media literacy — meaning, learning how to use search engines like Google’s and evaluating the links and results it returns, as a part of an update to the program’s existing media literacy materials.

Other lessons address issues like practicing empathy online, showing kindness, as well as what to do when you see something upsetting or inappropriate, including cyberbullying.

Concepts related to online gaming are weaved into the new lessons, too, as, today, kids have a lot of their social interactions in online games which often feature ways to interact with other players in real-time and chat.

Here, kids are presented with ideas related to being able to verify an online gamer’s identity — are they really another kid, for example?  The materials also explain what sort of private information should not be shared with people online. 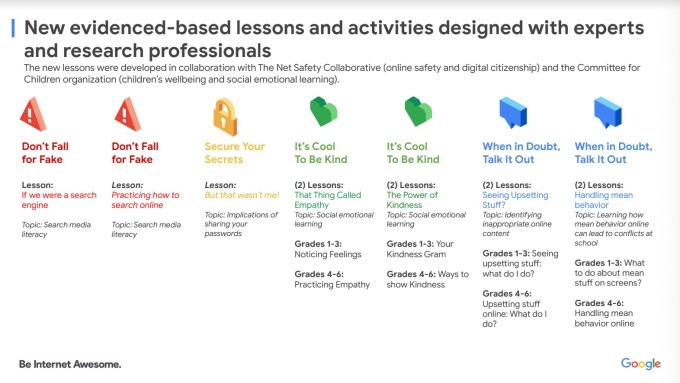 Among the new family resources, the updated curriculum now points parents to the recently launched online hub, families.google, which offers a number of tips and information about tools to help families manage their tech usage.

For example, Google updated its Family Link app that lets parents set controls around what apps can be used and when, and view activity reports on screen time usage. It also rolled out parental control features on YouTube earlier this year, aimed at families with tweens and teens who are too old for a YouTube Kids account, but still too young for an entirely unsupervised experience.

Google says the updated curriculum is available today to parents, families, teachers and educators, via the Be Internet Awesome website.

Dozens of people in Maine and New Hampshire complained that the sand had turned the soles of their feet black. Now the mystery is solved.

The singer is charged with two counts of simple assault in connection with an episode with a videographer during a concert in 2019.

The Centers for Disease Control and Prevention said 19 people had been sickened in eight states.

Mapping the ocean’s floor is a surprisingly vital enterprise, which helps with a range of activities including shipping, coastal protection, and deep-sea resource gathering. It’s also a very costly and time-consuming activity, which can be demanding and dangerous for those involved. Saildrone is a startup focused on building out autonomous exploratory vessels that can do lots of mapping, while making very little impact on the environment in which they operate, and without requiring any crew on board at all.

Saildrone’s newest robotic ocean explorer is the Surveyor, its largest vessel at 72-feet long. The Surveyor can spend up to 12 months at a stretch out at sea, and draws its power from wind (hence the large sail-like structure, which is not actually used like the sail on a sailboat) and the sun (via the solar panels dotting its above-water surfaces). Its sensor instrumentation includes sonar that can map down to 7,000 meters (around 22,000 feet). That’s not quite as deep as some of the deepest parts of the world’s oceans, but it’s plenty deep enough to cover the average depth of around 12,100 feet.

As Saildrone notes, we’ve only actually mapped around 20% of the Earth’s oceans to date – meaning we know less about it than we do the surface of Mars or the Moon. Saildrone has already been contributing to better understanding this last great frontier with its 23-foot Explorer model, which has already accumulated 500,000 nautical miles of travel on its autonomous sea voyages. The larger vessel will help not only with seafloor mapping, but also with a new DNA sample collection effort using sensors developed the University of New Hampshire and the Monterey Bay Aquarium Research Institute, to better understand the genetic makeup of various lifeforms that occupy the water column in more parts of the sea.

New Hampshire’s House of Representatives, whose speaker died of the coronavirus, has refused to meet remotely.

Rod Webber, a Boston artist with a provocative streak, is to receive $20,000 from the campaign, which admitted no wrongdoing.

After my son Ben died by suicide, I turned to hiking. I found myself: broken, but braver.

A Republican, he had a staunchly conservative agenda as his party took control of the state government in the November election. He died of Covid-19.

For the first time, the United States reported more than 3,000 coronavirus deaths in a day. But with cases still rising, experts warn “the worst is yet to come.”

State legislatures are still a threat to appointing electors contrary to the will of their voters.

These under-the-radar resorts offer plenty of room to turn, and plenty of challenge amid a winter of social distancing.

“He might love you one week and the next week, he wouldn’t come near you,” said an observatory official. “Typical cat.”

Seatbelt laws were a hard sell in state capitals as opponents argued they were uncomfortable or an imposition on personal liberty. Sound familiar?

A rural locale. Few Covid-19 cases nearby. Performers in a bubble. And a man-eating plant that couldn’t quite chow down on its victims.

Schools, forced to cancel in-person classes because of the pandemic, have become more comfortable with remote teaching. That might mean the end of the snow day.

President Trump has leveled scathing law-and-order attacks on Joseph Biden for weeks. But a new poll shows Mr. Biden ahead in three states Mr. Trump hopes to pick up, and maintaining a lead in Wisconsin.

The victories by Gov. Chris Sununu, a Republican, and Senator Jeanne Shaheen, a Democrat, reinforced the state’s battleground status. Corky Messner, who was endorsed by President Trump, won his primary to challenge Ms. Shaheen.

In a new filing, Ms. Maxwell’s lawyers are seeking to distance her from her former partner.

In a new filing, Ms. Maxwell’s lawyers are seeking to distance her from her former partner.

The event was set to be held in Portsmouth, N.H., on Saturday. The campaign delayed it amid ongoing concerns about President Trump attracting only small crowds at his events.

The governor, a Republican, isn’t attending. It isn’t clear how many other G.O.P. elected officials will come. The turnout could be low, or expansive. And fears of the virus hang over the event.

For years, I have been making images of my mother as her dementia progresses. The process brings us closer.

Schools thrust into turmoil by the coronavirus are slowly finding ways to cope.

In North Carolina, where the governor’s race is tight, and New Hampshire, where a Republican seeks re-election in a blue-trending state, incumbents could benefit from newfound star power.