Senator Joe Manchin III is caught between the mine workers’ union, which supports President Biden’s social policy and climate bill, and mine owners in his state who oppose it.

The fatal injury occurred when the mine’s roof fell onto equipment the miner was using, officials said. No one else was caught in the collapse.

President Biden and Senator Joe Manchin III have many differences over the proposed domestic policy bill, but one issue stands out: the child tax credit.

Democrats have been left hoping that the West Virginian, who fashions himself as an old-school centrist dealmaker, will eventually budge on President Biden’s agenda.

The senator from West Virginia has said he cannot vote for the president’s signature policy. Why not? And where does this leave President Biden?

Senator Joe Manchin III noted climate policy when he said he would vote against the Build Back Better Act. In his life and career, West Virginia coal has loomed large.

The proposal to join West Virginia seems destined to go nowhere. But it has tapped into deep-seated feelings of alienation in western Maryland, a mountainous panhandle wedged against the Mason-Dixon line.

If the Biden agenda has a future, it depends on everyone in the caucus being on board.

The centerpiece of the president’s environmental agenda has fallen apart because of the objections of a single senator.

On climate and children, he’s hurting his own constituents.

As the senator blocks Democrats’ push to reduce warming, new data shows his constituents are more exposed to worsening floods than anywhere else in the country.

A program in West Virginia, partially rolled out while Joe Manchin was governor, could be a model for the nation. But there were challenges, including the 10 years it took to establish.

As his state was battered by Covid-19, Gov. Jim Justice of West Virginia applied to coach a boys’ team in his spare time. When the school board rejected him, he threatened to haul the members before a judge.

Coal’s glory days ended during the Reagan era, and they aren’t coming back.

Senator Joe Manchin is already a crucial swing vote in the Democrats’ sweeping budget bill. But he will also write the details of its climate change program.

At the Battle of Blair Mountain, thousands of miners clashed with sheriff’s deputies in the largest insurrection since the Civil War.

In mending rather than ending the rule, he might get us a little closer to a workable middle ground.

The senator has become a lightning rod in his party and a major obstacle to President Biden’s agenda. In his home state, his stubborn belief in bipartisanship is recognized as the core of his being.

Mr. Manchin stands in the way of the Biden administration’s expansive agenda. But in his home state, progressive Democrats with far-reaching policy goals are not his base — and he knows it.

He should follow in the steps of Robert Byrd and reform the filibuster.

Senator Shelley Moore Capito of West Virginia has been discussing a potential bipartisan infrastructure deal with the White House, but a compromise faces stiff Republican resistance.

State employees who get vaccinated in Maryland are eligible for a $100 payment, while Detroit is giving out $50 prepaid debit cards to those who give someone a ride to a vaccine site.

Mr. Manchin’s belief in the need to keep the filibuster has set the stage for a collision between Democrats eager to use its majorities to pass sweeping legislation and a political throwback determined to restore bipartisanship.

The New River Gorge in West Virginia got the federal government’s highest protection, thanks, in part, to the latest pandemic relief bill.

With the right federal response, it could become a model of renewal for other places around the country that prosperity has left behind.

The governor of West Virginia, who supported a bigger relief bill than Senator Joe Manchin, a Democrat, initially did, spoke with us about government spending, Covid-19 vaccinations and climate policy.

I left my hometown because I felt alienated from its conservative values. Turns out many in my community had forgotten our progressive roots.

West Virginia has used 83 percent of its allotted vaccines, among the best in the nation. But even efficient operations face a major problem: There simply are not enough shots to go around.

The Republican lawmaker who was arrested for storming the US Capitol has resigned from the West Virginia State Legislature. “I hereby resign as a member of the West Virginia House of Delegates, effective immediately,” Derrick Evans wrote in a one-sentence letter to West Virginia Gov. Jim Justice on Saturday.

Evans also released a statement saying, “I take full responsibility for my actions, and deeply regret any hurt, pain or embarrassment I may have caused my family, friends, constituents and fellow West Virginians. I hope this action I take today can remove any cloud of distraction from the state Legislature, so my colleagues can get to work in earnest building a brighter future for our state.” Evans also wrote that he hopes his resignation will help “begin the healing process” for the United States.

Evans, who served in the state legislature for just one month before his resignation, was part of the Trump-incited insurrectionist mob that broke into the US Capitol on Wednesday last week in an attempt to stop certification of Joe Biden’s presidential election victory. Evans livestreamed himself on Facebook while chanting Trump’s name and yelling, “We’re in! We’re in! Derrick Evans is in the Capitol!” In another video he posted earlier in the day, he said that “people who are tired of liberals running this country and stealing elections” should “get off the couch and show up today in force and send a message.” The Trump-incited mob violence led to the death of a US Capitol police officer. 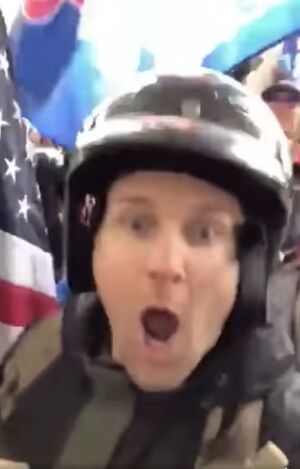 Derrick Evans shouts on his Facebook livestream as a mob enters the US Capitol. (credit: Derrick Evans)

The West Virginia state lawmaker who was part of a pro-Trump mob that stormed the US Capitol was arrested today and is being charged by federal authorities.

Derrick Evans, a newly elected Republican who was sworn in to the West Virginia House of Delegates last month, livestreamed himself on Facebook Wednesday as the mob broke into the Capitol. On Friday, Evans was “charged with entering a restricted area of the US Capitol,” the Associated Press reported, citing a Justice Department official.

“Ken Kohl, a top deputy federal prosecutor in Washington, announced the charge against Republican state Del. Derrick Evans on a call in which he presented dozens of new charges against members of the crowd that violently stormed the Capitol on Wednesday,” the AP wrote.

On a holiday when health experts admonished people not to travel, the weather brought its own hazards across much of the country.

A Republican US senator from West Virginia has asked the government to block broadband funding earmarked for Frontier Communications, saying that the ISP is not capable of delivering gigabit-speed Internet service to all required locations.

The explosion in Belle sent shrapnel flying across a river, and as a precaution officials told residents to shelter in place, closed a highway and shut down nearby schools.

Frustrated by the dysfunction on Capitol Hill, Senator Joe Manchin III is eager to cut bipartisan deals and check what he views as progressive overreach in the Biden administration.

What if public health officials got awards instead of death threats?

For years, attendance rates have dropped and congregations have closed nationwide. But many reused religious spaces are still sanctuaries.

From the Berkshires to the Rockies, the vibrant colors of fall are popping, and nothing, not even a pandemic, can stop them. Six writers in six states reveal their favorite drives and hikes.

Reta Mays, who worked at a hospital in West Virginia, is accused of administering fatal doses of insulin to veterans.

The pandemic is giving a new competitive edge to states that have long seen their top students lured away by elite schools.

After a day of chaotic voting, Mr. Ossoff, a 33-year-old Democrat, was well ahead but still facing the possibility of a runoff election for the opportunity to challenge the Republican incumbent, Senator David Perdue.

The doctor, Jonathan Yates, worked at a hospital in West Virginia. He was accused of causing bodily injury to some veterans and abusive sexual contact while they were incapacitated, according to the federal indictment.

A for-profit company bought three struggling hospitals in West Virginia and Ohio. Doctors were fired, supplies ran low and many in need of care had to journey elsewhere. Then the doors shut for good.

Frontier Communications needs a lesson in how to redact documents.

Frontier is trying to hide large portions of an audit report from the public, claiming that details about the ISP’s broadband-network problems are trade secrets. But when Frontier made a redacted version of the report public, many of the blacked-out parts were still readable simply by copying and pasting from the document.

The Frontier-edited version of the 164-page report, which was ordered by the West Virginia Public Service Commission (PSC) and written by a consultant firm, includes about 80 redacted exhibits and many pages that have been fully or partially blacked out. Frontier seems to have successfully redacted the exhibits, including many charts, but the blacked-out text is easy to lift. (Update: It turns out some of the exhibits weren’t properly redacted, either.)

Appointees by the president make up more than a quarter of the appellate bench, populating seats on 11 of the 13 circuits. This was their path to confirmation.